IT'S GREAT TO BE ALIVE 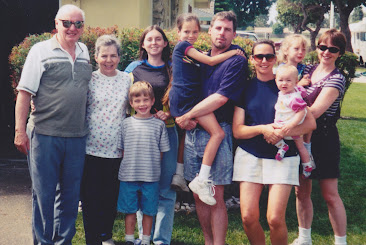 Written for my dad, far left, who put up with this motley crew and loved them in his own certain way, with memories that could fill a piece of prose, found below.

And so the sentiments are clear; the affirmation set

Recalling glimmers of visuals out of the murky haze

Holding close to heart all of our previous nights and days

Dreams of the past and future, memories of a life

“The universe is perfect – it’s great to be alive”

Coming into focus, names of yore from so far back

Friends and family – what more could anyone really want?

A reluctant student of economics, still you passed the test

Then came the unlikely insurance – it even took you out west

All from a stapler in a drawer … it was stuck

A vacation, the same weekend, taken together

Christmas mornings – waking up to half-eaten cookies on the hearth

All the places, every summer, in and out of traffic, where we’ve been

Familiar stories told over and over ... and over again

Meditation in the 70s, circle star one thousand and three … relax

Farmers Insurance, claims and fraud, each and every photostat

Coming home with boxes, angry at the ringing phone while “on call”

Doing the picks, bags of scratch offs, the winning lottery

Dan Meade over for football, the Miracle on Manchester game

Long drives in the car, everyone asleep but me in the back seat

Cooking chicken noodle soup all the way to the end

Since I was sick, you took me to a store to get sherbet and some pop

The amazing homerun by Kirk Gibson – man, what a shock

A call from Bete, those late night metaphysical talks

Each memory – a gift from a surreal world, so sublime

Yes visions of the past, present and future, memories of a life

Remembering always: the universe is perfect … it’s great to be alive