The Vital Role of Law Enforcement We All Must Protect 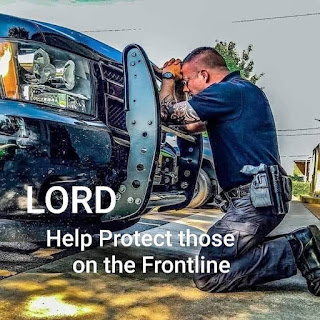 As I watch the marchers march onto streets and freeways, the rioters run roughshod in the roads burning down buildings, and looters ripping off businesses that once constituted community, what springs to mind is the devastated blow taken by our law and order.

Yes of course I speak of:
But also I speak of the law and order that is grounded in the day-to-day, nitty-gritty work of our men and women holding the thin blue line. Yes, I think about their humanity and the job they are called to do here.

If we didn't have these officers - far far far in the percentage honorable and faithful - our rule of law and order would completely collapse. We can't have that as a nation, no matter any emotional turmoil or controversy.

It should be remembered that these police - these humans behind the badge - must remain calm, centered, focused and vigilant in the face of the absolute worst-case scenarios. People spitting at them, yelling at them, throwing rocks at them, and yes shooting at them. They have to maintain civility while the most uncivil of actions are aimed their way.

Can any of us handle that?

I wouldn't be able to. I get lit up into a tizzy when I read a rant against me on some online platform. Some ranter goes all negative on me, and I instantly want to react. It's only natural. Fight or flight. Adrenalin. Heartbeat rising. Blood pressure. And that is all over a YouTube comment?

Imagine what these officers deal with. If not the horrors on the street, then it's the tragedies they must report in on. The families they must inform of a deceased son or daughter who will not be returning home. Car wrecks, murder, sexual assault, child prostitution, human trafficking, the broken spirit of those lost in homelessness.

And now all this?

Looters disregarding the laws the officers are designated to uphold. Rioters standing ground without a clear request but just a drive to deride and steal. People screaming in their faces, trying to hit or torch their vehicles.

And then after a full day of trauma and terror in the neighborhood, the officers are to go home and be a family man and family woman. A husband, a wife, a mother, a father.

It's almost too much to imagine.

I can not fathom the stress. I can't imagine the hypervigilance that must take over their minds and bodies ... and then remain there, as they attempt to deal with the most mundane tasks or try to simply lay down to sleep.

And as we see being played out on the latest newscast, as certain public menaces appear to get a free pass to be completely belligerent, aggressive, and violent, the officers are the ones who must train to de-escalate situations. The officers are to take courses and training on de-escalation and their own wellness, learning to normalize emotional, mental and spiritual states. They are the ones being trained in resilience and mindfulness techniques such as meditation in order to stay calm under fire. They are the ones who now, in San Diego as of June 2, must follow guidelines that prohibit choke-holds as a defense technique. They are the ones who must work with recent California laws that could make it harder for them to instantly defend themselves if need be against a potential shooter.

They are doing all that. And more.

They do it anyway, because it's what they are called to do. Not just for a paycheck, but for the good of a community, and for our good.

If they are doing their part in de-escalation scenes, and protecting property and persons as best they can, and holding high the black-and-white standards of law and order .... what about us? What is the citizens' part?

I'll ask it again: What can you as a citizen DO today to join in "one force" for the good of all?

What can you do to bring the best relations between law enforcement and the community?

I'd like to hear your answers. Please answer below by following the simple instructions.

Thank you for your participation.

Thank you for answering the question, and pondering the topic of joining together in "one force."


"WHAT I CAN DO IS" MONTAGE - GIVE YOUR INPUT

As part of the “One Force” project, a montage is being produced wherein a number of people - activists, community members, law enforcement, leaders - will answer one question to help build a positive bridge between police and the public. Imagine it.

Can you answer this: "What can you personally do to help build the positive relations between community and law enforcement?"

Once you are clear on that answer, you can:
Imagine the montage of having so many different voices, from various parts of our society, answering that! Powerful.

For an example, here are a few answers from various sources: CLICK HERE.