Why Not Mention It? 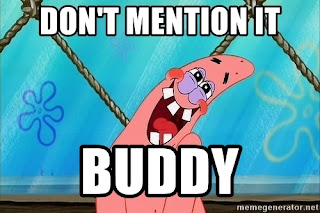 At one point someone had to be the first to say it. Say what?

Oh my, really? Don’t mention it?

It comes at a time when someone, in some sort of inspired expression of gratitude, offers a word or two or three of appreciation. Some phrase like “thank you” comes flowing gracefully from a person, uplifted by some kind act of a pal, barista, clerk, stewardess, construction worker, barber, undertaker …

And what is the response to the “thank you?”

Why not mention it? The gratitude was there to be expressed. It’s even a light, positive, happiness inspiring expression.

The real question at that point might be “why not accept it?”

Why will some folks simply not receive in the positive words coming their way?
The creator of verbal language even came up with a return phrase, found within the astute Webster’s Dictionary and other distinguished literature and documentation.

Though there are many other such phrases to represent the receiving of the good, people may have their own barriers. Is it better for some to not receive gratitude, making the kind act a selfless one? Is it a sign of weakness to receive? Do they believe they don’t deserve it? Are they afraid if they say something like “you’re welcome” this will ruin their chances at a tip? Who knows!

There are some other great lines and strategies to discount other’s words of gratitude and shift attention away from some appreciation coming their way:

I really believe we’d all be more uplifted if we participated in the mutually uplifting ritual of giving and receiving gratitude. It creates a synergy flow of the good that can feed on itself. I have a theory that those people who don’t receive appreciation end up those cranky old men and women who feel they have been left behind and that no one appreciates them.

Let’s not be that guy, that gal. Let’s be the ones who receive the appreciation, as well as receive our friends who see and acknowledge the good that we bring. It’s alright. It’s all good.

And as far as that other phrase … whoever it was, whoever came up with the silly ole misplaced statement; I just have one thing to say.