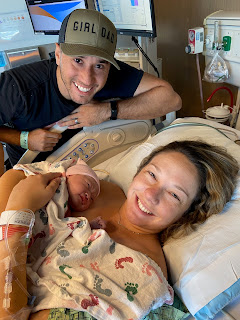 My niece Grace and her husband Cody, first time parents, today. Yup, today...
______
Well welcome here – welcome to this world
7 pounds 1 ounce – a healthy baby girl
So happy to see you, happy you came along
10 fingers and toes, almost 20 inches long
Born July 30, 2020, 2:10 in the afternoon
Right on time – truly not too late … and really not too soon
Gosh – what will be your story, your fairy tale?
Sweet little one … sweet Abigail

Your folks are so happy, smiles ear to ear
The world’s latest arrival – so precious and dear
The sky opens up; pathways stretch ahead
Memories of the infinite fill the heart instead
The marriage of your spirit has caused you to create
An extension of your love, destined to fulfill a fate
Born amidst harmony, among those cradling peace
Here comes the grand celebration of a great, great niece

So what have you in store, any wonderful plans as yet?
I’m sure you’ll be funny and sunny, with gags you’ll give and get
Of course, it’s all wide open; it will ultimately be up to you
Everywhere you’ll go, and all you’ll see and do
Of course there will be the pratfalls, you know, those times to stumble
If anything like your parents, you’ll be gracious, generous and humble
There need be no opposition; there is no need for rival
For you, newcomer here, the world’s latest and greatest arrival
Gee – a lovely start to your journey, on into this chosen world
Born just this afternoon – a beautiful baby girl
Yes … what will be your story … your holy fairy tale?
Sweet little divine one … sweet Abigail
Posted by James Anthony Ellis at 9:58 PM No comments: 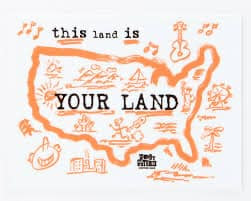 (A parody prose reflecting on current crazy events, as sung to the tune of “This Land is Your Land.”)

This land is your land, and this land is my land
From Left Coast Coolsville, to the New York mob squad
From the Congress fortress, to the deep still waters
This land was made for you and me

I rushed and rioted, and I've followed my stampede
To the sparkling fireworks thrown in the darkness
All around me a mom’s voice screaming
My child was killed for you and me

When the sun come shining, then I was so shocked
The buildings burned out and the dust clouds billowing
A voice was moaning as the flag was simmering
This land was torn for you and me

This land is your land, and this land is my land
From churning Seattle to burning Portland
From Chicago’s death march, to the lawless New York
This land was wrecked for you and me

When the bricks were soaring, then I was ducking
And the punches flying, the bodies piling
The propaganda chanting and the morgue was filling
This land was spoiled for you and me

This land is your land, and this land is my land
From California to the New York Island
From the Redwood Forest, to the Gulfstream waters
This land was made for you and me

This land is made by you and me