Justified In Their Emotions 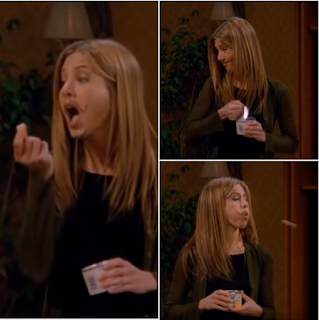 There is this “Friends” episode that gets me sorta upset. And if I didn’t know it was most likely a fictional show, I’d be really pissed. But the scene in this certain episode reflects a situation that raises its ugly little head every now and then, much to the chagrin of those with common logic and a sense of fairness.

No, it’s not when Rachel got out of the speeding ticket after flirting with a cop … which was followed by Ross actually getting a ticket for a separate highway infraction.

No, it wasn’t Joey having no consequence or care when eating the dessert of his date, with all that chocolate on his face.

Worse – it was the time Ross, in an innocent and playful game of “got ya back,” drew a mustache on Rachel’s face with a magic marker when she was asleep. Turns out the marker was indelible, as if that is even possible.

Anyway, long story short. Even though Ross held no real malice in his marksmanship, it so angered Rachel that she decided – on her own, unilaterally – that her emotional response to the situation justified ANY sort of act of retribution she saw fit. Out of spite, since she held the leverage, she chose to act careless – with a hated malice and intent to avenge – in wasting all the pricey macadamia nuts for which Ross would be paying. Though she didn't even like the nuts, she opened them and just spit them out on the floor in front of Ross.

OK, OK, I realize my upset over a show may come across a bit over the top … and emotionally based in itself. However, upon introspection, I can see how this episode REMINDS me of other situations in life where an upset person can feel so justified in their emotions that they can easily play judge, jury and executioner.

I recall in my younger years when a live-in girlfriend was very upset at me over something I did mistakenly that hurt her. Even though it was done without malice, her upset justified her actions of talking to me in the most disrespectful and borderline cruel way. On her own, unilaterally.

I imagine because I felt some guilt over my mistake, I must have on some level believed I deserved the punishment.

This transpired over a couple of weeks until I woke up to a concept of common fairness and decency, and realized I didn’t truly deserve to be spat upon like this. I recall coming home from work one day, no longer walking on eggshells or acting like a dog who should be beaten. I was no longer acting like Ross. She was on the phone with a friend. I overheard her say, “I think he’s done with this.”

This idea of people being justified by their emotions to do as they please to others - on their own, unilaterally – is just not OK.

Small minds do this.

Immature minds do this.

A mind built on emotion – irrational – without a sense of true fairness or justice does not look at situations from all angles.

Such a state of mind can send upset people into the streets. Acting out in ANY way they feel justified. Bricks. Fire. Striking innocent bystanders. Destroying business storefronts. Spitting on people, throwing rocks at people, shooting and killing people.

Writer and producer James Anthony Ellis can be reached at www.LegacyProductions.org.