Yoga Stretches - What is the Goal?

I've done yoga, off an on, for about 10 years, not counting the two-hour weekly class I took in college circa 1985. I have had tight hamstrings since ... I was born.

Now even though I'm no expert, I did have a realization about yoga the other day. It was a day I was doing yoga, after a week of experiencing a sore back. My wife and I were doing an online yoga class from this cool site called Yogaglo. I was truly enjoying the stretches as my sore back was appreciating the gentle movements into the soreness. As the teacher guided students into the postures (asanas), I realized I was only going to go as far as my body dictated, allowing for the stretch that best suited me, apart from the final posture by the teacher.

AHA! Here is where it really hit me.

Western yoga still leans too heavily on the results of completing a full posture, rather than the individuals’ experience within any of the postures.


Yes, many teachers do mention this concept in pretty much every class, but not enough of the teachers STRESS heavily and consistently that the individual stretch, and breath into that, is the purpose of a yoga session and the source of the pleasure within a practice. It’s frustrating to watch teachers in the West move deeply into an asana, mostly because they can, with the subtle, perhaps unconscious, message that the fulfillment of it is a goal.


There is no outward unified goal within a yoga class, except for the common understanding that each participant’s body is different and each person can learn to love the practice when he or she moves into a stretch at their own limit and then find the mobility to move gracefully further. Movement by movement. Moment by moment.

Yoga is an individual practice, and teachers of classes must constantly remind themselves and each student of this truth. It will eliminate the frustration students have when they can’t apparently "keep up" or move as deeply into a posture.

Let's stretch into this truth. It will only help.


James Anthony Ellis is an enlightened yogi who can maneuver his body into any posture within the practice of Hatha Yoga, thereby awakening each atom and molecule with oxygen flow, creating an environment of pure consciousness and bliss. He is also a talented creative writer, not above some fun and light-hearted fiction. His books and works are found here:  www.LegacyProductions.org.

Posted by James Anthony Ellis at 2:55 PM No comments:

Connecting To Spirit - What Other Choice Is There? I once was mugged. I guess that's what you call it.

Though maybe it was something else. What do you call it when you have a barrel of a gun pressed up against your neck and a couple of thugs are asking for your wallet and your money? Well, whatever that is - I had that happen.

At the time, I remember having two thoughts. And both of those thoughts were directed not towards the thugs or "muggers" but rather to spirit or what some may term "angels" or "spirit guides." I asked the question, "Am I going to die?" And then when I clearly received the inner answer "No," I then had the thought, "Well, that's a relief."

Amazingly, in what could have been one of the more terrifying situations, I was actually - believe it or not - quite relaxed. And I give credit to one very important fact:

I was connected to spirit.

You see, earlier that evening I had been, for all intents and purposes, meditating for about two hours. I had been facilitating a healing modality wherein I would dig deeply and fall into a connection with the higher powers that exist in the higher realms. I had surrendered to that higher will and felt the presence and peace that comes with that. The fact I chose to go to the store directly afterwards, be followed home by a couple of thugs and then proceed to have my neck invaded by a gun barrel, this somehow could not sway me from that connection to something bigger and brighter than anything this silly ole physical world had to offer. 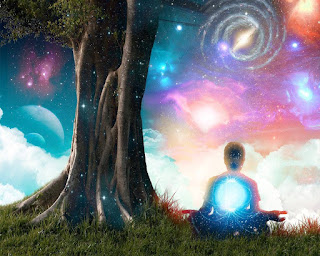 So there I was:

A. Without a wallet
B. Without my car keys (though they threw them back at me as they left for some odd reason)
C. With my groceries (I offered to them but they weren't interested in my soup cans and bananas)
D. And with this stillness.

And it was enough.


Having a connection to source is vital as we walk the crazy landscape that is a world of duality, especially as the insanity is turned up with political campaigns, social unrest, racial tensions and regular and routine mayhem. If we can find a way to connect deeply within - to that still, small voice of absolute reason and unconditional love - we can uncover a sane mind that can see us through any and all turmoil.

In these states of connection, I can't be scared and I can't be upset. I even recently had the experience of guiding some healing energy towards our pooch who was sporting a sore on her paw. A few moments before "running" the light energy over her body, I had been perturbed by one of the 1.2 million things that can bug me in a day. But AS SOON as I turned my focus towards the light energy from above, with the intention of sending that energy through our dog ... that upset feeling INSTANTLY vanished. I could only sense the higher connection. 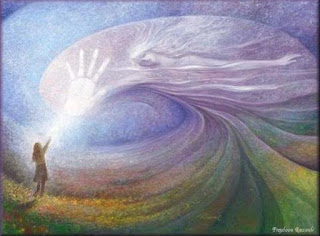 This told me that I have to make a choice. I can't have my cake and eat it too. I can't be mad and connected to a higher source at the same time. I would have to carry one or the other. Connection, love, light and harmony.... OR .... discord, upset, frustration and anger. Hmmmm. Decision, decisions.

In a world with enough upset and challenge to go around, I can now see the sanity of choosing connection. I have had the experience of focusing on spirit and maintaining peace in the most upsetting of situations. And this all leads me to the crossroads of choice - which sort of life do I want to live? What sort of energy do I wish to attune? What path is the one that will lead me to a higher ground of joy, harmony and peace?

I know the answer. A couple muggers, a needy pooch and the sweetest of connections to a grace beyond compare have helped me to discover it. 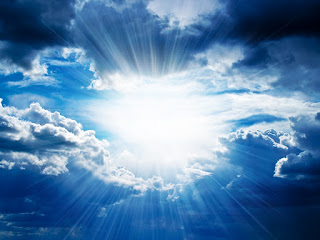 James Anthony Ellis is a writer and producer (and meditator sometimes) who lives in Lemon Grove (and bliss sometimes). He can be reached at www.LegacyProductions.org.

Posted by James Anthony Ellis at 12:05 AM No comments:

Freedom Over the Years

Freedom for all - that's the focus.

Each week, since August 2011, my wife and I have hosted an Internet radio show "Freedom For All" that has touched on topics related to inner freedom (meditation, healing, dreams, philosophy) and outer freedom (GMOs, vaccinations, government controls, human rights, etc). For almost all of the shows, we have had guests join us each week to bring us their own story, viewpoints and flavor of freedom.

Throughout these five years of shows, what has stood out to me is that everyone loves and cherishes the concept of freedom, and yet each explains it differently, according to their frame of reference, their career path and their higher purpose.

As you can see, each person has a slight different take on this thing we call "freedom." The through-line though: an identity of self that can make choices based on truth with the result being happiness. Sounds familiar: "life, liberty and the pursuit of happiness." Ah ya, that old saying. It's from some document that is designed to establish a countryman's freedom.

Another thing I noted over the years is how some freedom can mainly be defined through the lack of it. "Freedom" in a physical body can be realized when pain and sickness can make the body a prison for us all. Having a government dictate to us what chemicals we must put into our child's body pushes our autonomy to the forefront. Police and politicians who are held to a different standard than the common people heralds the beginning of a tyrant / slave relationship.

In this light, the need for freedom arises when it is being pressed upon. So perhaps freedom is a natural state of being that can be recognized mainly when it's being taken away - as in limitations, controls, censorship, injustice and all-out abuse. We are born free, and we must find our way throughout our cultures and society to always maintain this state.

The backbone of any freedom in our society is something called "Natural Law." Support for this form of law came from the likes of: Ancient Greece, English common law, the US Constitution and a few enlightened philosophers. I'm not an expert on it, but to me a law based on nature - which would naturally be universal - would be a foundation for all of us at the humanity level ... where we are all equal and, believe it or not, connected. With a natural law respected, the notion of reaching over to another person and harming him or her is preposterous. The mere act of crossing over a boundary of another human or a territory of another people would break this law. Therefore breaking natural law would appear as: sexual abuse, physical abuse, rape, murder, stealing, lies, all of the deadly sins and pretty much everything on that tablet from Mount Sinai.

So for me, the litmus test for freedom and natural law is a phrase I ask myself often: Am I breaking another person's autonomy or natural boundary with this action? If the answer is "yes," then I think to either curtail my action, reframe it, or do the respectful thing and ask the other person's permission.

Freedom is a fascinating concept. I used to be afraid of the notion of freedom since I believed if someone was free than that gave him or her license to kill, maim and hurt others without care or consequence. But then, upon reflection, I realized that when people are free - with the associated emotions and behaviors associated with this - then killing and harming others is far from their minds. It is, in fact, impossible.

Let us all be free and then share the gifts with others when we are in that natural state, so we can indeed live in a world where we have "freedom for all."

James Anthony Ellis is a writer and producer living as free as he can in Lemon Grove, California. He cohosts "Freedom for All" Radio with his wife Jennifer at blogtalkradio.com/freedomforall.  He can be reached at LegacyProductions.org.
Posted by James Anthony Ellis at 1:14 PM No comments: