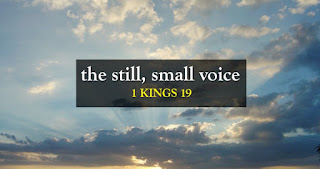 (I went full-on Bruce circa 1973 when he thought he had to rhyme everything - remember: "Madman drummers bummers and Indians in the summer..." I tried to change it below, but it wouldn't let me. Here then, another plea for peace.)

Shaking in this quake as I lie awake

Everything at stake, yet it all just seems so fake

I try to breathe deep, so I can fall asleep

As beams in the attic creak, and stairways ascend too steep

Cries in the night, howling a burst of terror fright

Pleading for new sight, so that finally I can be all right

Time to be quiet and still, I'm offered an array of new choice

A deeper will, on this day ... a still small voice

In the freak-out alarmist drills, a dreary prophecy fulfilled

A backache and headache crescendo into heartache

Boisterous bickering in the head, all sanity has fled

I'd rather hear the music of the spheres instead

Moments to slow down, the subsiding of incessant noise

The lilting serenity of a mother's lullaby

Recognizing the foibles, the folly and the play

Yet never losing sight of beauty along the way

Nudging gently, in guidance, pointing out a Divine plan

Judging not - any race, religion, woman or man

A soft breeze upon the face, always full of grace

Rushing not - but like a stream, moving a steady pace

Now seeing the majesty of the mountains, the clear blue sky

Perceiving the symmetry of the fountains, hummingbird wings as they fly

The mosaic of cause and effect, as above so below

The horizon ocean line perfect, the colors of the rainbow

The sunset and the sunrise, each time a new surprise

Of life, what we make, take it higher, with the one and only choice

After the earthquake a fire ... and after the fire a still small voice