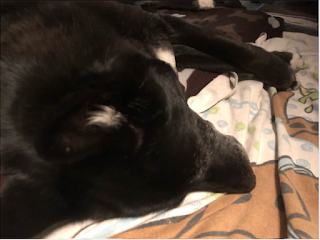 My dog runs in her sleep.

Her little paws flipping up and down as she’s lying there. Eyes closed. Breathing deep.

She must be asleep.

And yet she runs.

It doesn’t appear to be a sprint but maybe a simple graceful jaunt. A jog. A trot.

And where could she be going? I wonder.

Could it be our neighborhood park next door? Could it be her going after a chew toy we threw down the hall? A run on the beach? She never seemed to like the water much.

Maybe she’s recalling the time when she’s ready for dinner and she jets to and fro between her momma and me hoping to get one of our attention. Barking loudly.

For it’s true besides the flipping paws, every once in awhile she’ll eek out this little muffled huff. High pitched. So faint. It’s actually sort of cute, but at the same time it’s somewhat sad.

She’s trying to communicate something to someone, and she’s also moving along in stride.

I will listen, I tell her.

Whatever your little high-pitched huff is trying to say I will see if I can decipher. Wherever you want to run to, I can run with you. The beach? The park? For a stuffed animal?

I will go along.

As we run. As we jaunt. As we attempt to get someone’s attention.

James Anthony Ellis is a writer living in San Diego, and can be reached at www.LegacyProductions.org.